For a company that exploded into modern consciousness through its Quattro all-wheel-drive technology, delivering a crossover with just two-wheel drive could be a big leap for Audi. While some models offer all-wheel drive, Audi will deliver the entry-level versions of its all-new segment-stealing Q2 baby crossover SUV with just front-wheel drive.

All Q2 models will run as front-wheel-drive cars most of the time anyway, with the all-wheel drive doled out by an electronically controlled, multi-plate differential. Fitted as standard only to the range-topping 2.0-liter petrol and diesel models, and optional on the 1.4-liter petrol and less-powerful 2.0-liter diesel models, the system only moves torque to the rear axle when the front end has run out of grip.

Looking past which wheels are driven, there are more reasons to be positive than negative about the Q2. First, where the Prologue concept was the first car from new  design boss Marc Lichte to wear an Audi badge, the Q2 will be his first production model. No more sausages cut to different lengths, he insists, and you can tell he means it when you look at the huge, chamfered cut they’ve taken out of the top of the doors at the tornado line. Designed and conceived for a younger, more urban audience than any Audi before it, the Q2 will also deliver buyers a full Mini-style level of individualization for its five-seat cabin.

Audi will launch the car with six different engines and the teasing promise of plug-in hybrid power “one day” in its life cycle. At 13.7 feet long, the Q2 is 7.67 inches shorter than the Q3 and far lighter, too. At just 2,657 pounds, it’s light enough that Audi felt comfortable giving it a 114-horsepower, 1.0-liter, three-cylinder engine as its entry powerplant.

From there, Q2 buyers can step up to a 1.4-liter, turbocharged four-cylinder engine with direct injection, variable valve timing and lift, and cylinder-on-demand technology, with 148 hp. The top petrol-powered variant will have the 2.0-liter, four-cylinder turbo motor, with both direct and indirect fuel injection and 190 hp. A 114-hp version of the 1.6-liter, four-cylinder turbo diesel provides the step-in point to the diesel range (in Europe, anyway), followed by a 148- and 190-hp versions of the 2.0-liter turbo diesel. All of the 2.0-liter motors use a seven-speed dual-clutch transmission as standard equipment, and while the same unit is optional across the board, the stock versions – again, in Europe, anyway – use a six-speed manual gearbox.

The Q2 is based on the MQB modular architecture shared with the A3 and Volkswagen Golf, amongst many, many other cars. This new Q2 has an 8.5-foot-long wheelbase with short front and rear overhangs, though its nose is dominated by a new version of Audi’s single-frame grille. The Q2 is only 5.9 feet wide and five feet tall, and Audi decided against the use of exotic materials, instead making the Q2’s body out of form-hardened steels. 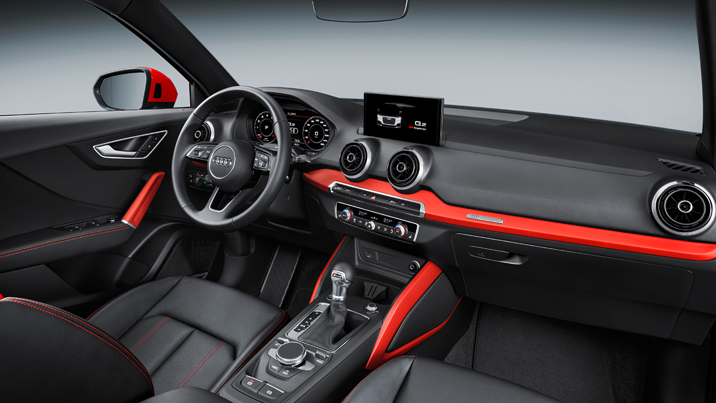 Given its expected appeal in city areas, Audi gave the Q2 wide-opening doors and a 14.3 cubic feet of luggage space, which can be increased to 37.1 cubic feet with the split bench rear seats folded down. There will be options for a 40:20:40 split rear seat and for a power tailgate that closes and opens at the touch of a button on both the tailgate itself and on the key fob.

Audi insists the driving position will have the low-slung control of a typical sedan but the increased visibility of a crossover SUV. But the real key to the Q2’s success or failure will be its interior design and equipment, and Audi doesn’t seem to have skimped. It has the junior version of the Virtual Cockpit that Audi already uses in the TT, R8, Q7, and A4. The system, which uses a 12.3-inch high-definition graphics screen to replace the traditional speedometer and tachometer, can also bring the navigation or the entertainment to the driver’s attention at will.

The Q2 also comes with an optional head-up display, projecting much the same information on speed, navigation and speed limits onto an adjustable glass screen in the driver’s line of vision. There’s also a fixed multimedia screen high in the Q2’s dashboard that comes in two sizes, depending on specification. It contains the car’s navigation, entertainment, internet, and car setup details, and is controlled by a rotary push-knob and two auxiliary buttons on the central transmission tunnel. Besides a larger multimedia screen, the MMI navigation plus delivers an integrated wifi hotspot, a free Audi Connect application for smartphones and free media streaming. It also serves as the interface that hooks iOS and Android smartphones up to the Apple Car Play and Android Auto systems in the car. Top-end Q2s will have the option of a 750-watt, 14-speaker Bang & Olufsen sound system.

Active safety was not overlooked, with Audi leveraging the MQB architecture to pluck the best electronic wizardry from Audi’s larger cars. It has standard autonomous pre-sense front braking, which can recognize cars and pedestrians and sounds like a good idea for a machine that will spend most of its time in the city. There are plenty of options that can be tacked onto that, though, including adaptive radar cruise control, which comes with a stop-go function so you don’t need to touch the brake or accelerator pedals or the steering wheel at up to 40 miles per hour to survive traffic jams. The Q2 also delivers radar- and video-based support for lane changing, blind-spot detection and speed zone recognition. And it’ll self-park in both parallel and 90-degree car parks, with radar sensors to warn of potential problems when the car is being reversed out again.

The Q2 arrives in Europe in the third quarter of this year, after its debut at the 2016 Geneva Motor Show.